Grab the opportunity to visit one of the most famous and important places in Greece since 7th century B.C.,Olympia, the birthplace of Olympic Games ! You will start early in the morning from your accommodation with your English speaking driver who will drive you to Olympia, which is located 290 kilometers from Athens and about 3½ hours drive, at Peloponnese peninsula.

On our way there you will first have a small stop at the Corinth Canal. A remarkable waterway that connects the Ionian sea with the Aegean sea and allows cargo and commercial ships to save time and money as they pass through it. A masterpiece of engineering that makes the Peloponnese peninsula the biggest island in Greece.There you will have the opportunity to stand on the bridge that passes over the magnificent canal and to take some memorable pictures. After this small stop for pictures and maybe a coffee break we will continue to our main attraction, at the archaeological/historic territory of Olympia. Olympia’s history end of the final Neolithic period (4th millennium B.C.), and is considered one of the most important places to trace the roots of Western society due to its religious, political, and sports tradition where remarkable works of art and culture were created during that age.

Olympia was the center of worship to the Greek god Zeus, the father of the twelve Olympian gods, from about the 10th century BC. Great artists, such as Pheidias, have put stamps of inspiration and creativity here, offering unique artistic creations to the world such as the Temple of Zeus, the famous complex of Hermes by Praxiteles and the statue of Nike of Paeonius. But Olympia wasn’t just a sacred place for God Zeus! It was also the birthplace of The Olympic Games and The Olympic Spirit. It was the most famous and important athletic event in the ancient world paid homage to the finest athletes. That’s why during the Olympic Games any kind of war was ending. The Games represented peace and the nobility of competition. These ideals and elements of the events have continued to this day. The Olympic Games were celebrated regularly from 776 B.C. The Olympiad became a chronological reference and dating system which was used widely in the Ancient Greek world. The athletes were coming to Olympia from all the Greek cities in order to have a peaceful and loyal competition among free and equal men with their only ambition the symbolic reward of an olive wreath. The Olympic Games went through various phases of acne and decline, until they were banned in 393 A.D. by Theodosiο the Great, emperor of the Byzantium, as idolaters. In 1896 through the efforts of Pierre de Coubertin, the revival of the Olympic Games was a mark in modern Olympic Games history.

Now is undoubtedly the world’s most important athletic competition that illustrates the lasting nature of the ideals of peace, justice, and progress—the most fragile attributes of human heritage. The values of fair competition and sacred truce that were established during the ancient Games, remain among humanity’s highest goals. Consequently, today’s visitors can feel the same spiritual and ideological force that drove athletes thousands of years ago. You are going to have the opportunity to walk among the Ancient Stadium of Olympia, where the priestess lights up the torch only with the sunrays and gives the Olympic Flame at the beginning of the Olympiad, also visit The temple of Zeus and Hera, The Arch of Neron, The Academy complex, the Gymnasium and of course the monument where the heart of Pierre De Coubertin was buried after his death. A visit to both the Archeological museum of Olympia and the Museum of the Olympic games is depending on your will Then we can continue our journey, visiting the beautiful village of Archaia Olympia. There, you can have lunch in a Greek Tavern,buy traditional products made from olive trees and souvenirs. After all these you can get some rest inside the car while we will drive you back to your hotel/accommodation with safety and comfort.

The Temple of Zeus and Hera

The Arch of Neron

The museum of Olympic games 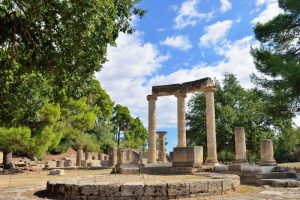 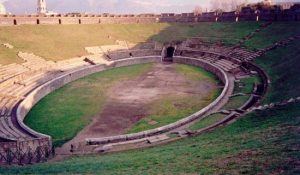 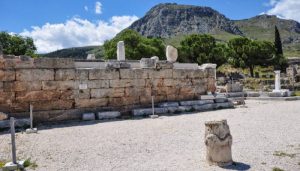 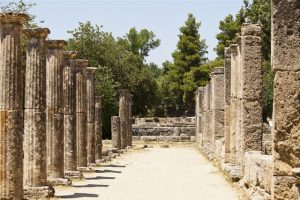 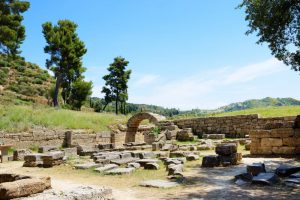